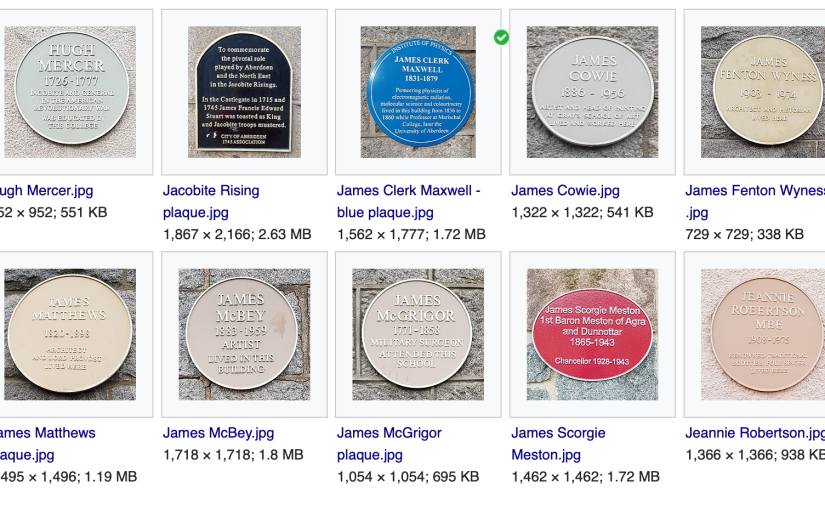 On Saturday 14th December 2019 we ran a one-day mini hack event. The idea behind it was for people to come along for a day to work on their side projects and, if they needed support, attempt to persuade others to assist them.

That’s what I did with my Aberdeen Plaques project: something I’d had on the back burner for more than a year.

The commemorative plaques which are dotted around the city are a perfect candidate for open data. They have a subject, usually some dates, are located somewhere, and are of different types etc. Making that all available as open data would open up a whole range of possibilities.

If we captured all of that well then we could do analysis on the data (ratio of women to men, most represented professions), create walking routes (maybe one for the arts, one for the sciences and so on), create timelines to see what periods are more represented.

Having recently trained as a WikiMedia UK trainer – and having experimented with some of the tools (Wiki Commons, Wiki Data, Wikipedia, Histropedia) I was convinced that these were the right way to go.

So, in advance of the hack day I’d done a bit of prep in the two weeks running up to the day iteself.

I’d then populated some of the data (eg whether there were images of the plaque on Wiki Commons) as well as some other bits. But most cells were blank.

As a keen walker and photographer I had also photographed and uploaded seventeen plaque images to Wiki Commons in the lead up, so that we would have some images to work with.

How to use our time most effectively on the day?

Our aim for the day was then to find out what data / info / images existed, fill in the gaps, and explore how to use WikiData to store and retrieve data, and how we could potentially create maps, timelines and similiar new products.

What we did on the day

At the start of the event we pitched our project ideas, and I managed to persude five others (Angela, Mike, Stephen, James and Steve) to join me in working on the plaques project.

Angela and Mike, and later Angela and Stephen would go out and take photographs. Steve, James and I would work on the data capture, completing research on what existed, creating new entries for the data on Wiki Data, and testing queries on the Wiki Data query service.

How we did it

We used the spreadsheet that I had set up to capture all of the data we’d gathered – and as it eveolved it would show progress as well as what was still lacking. We had no expectations that we would do it all on the day, but we could pick away at it in future weeks and months.

In the run-up to the event I’d discovered The Pingus’ album of plaques photographs on Flickr. Sadly these had not been published with a licence that would allow us to use them. I’d sent a request, a few days before CTC18, for them to change the licence for the Aberdeen plaques pictures to a CC-SA one. This would have allowed our republishing on Wiki Commons. Sadly it didn’t elicit a response. But the album did show that there were many more plaques than the old ACC system listed. And it was possible to get co-ordinates from them. So the number of plaques to deal with kept growing.

During the day James filled in loads of gaps in which subjects were on Wikipedia and which on Wikidata.

Steve and I experimented with capturing and querying the data. Structuring that in a way that aids recall through Wiki Data Query Service was an interative process. Firstly I tried adding a statement ‘commomorative plaque image’ (P1801) into the wikidata record for the subject as you can see in this first example https://www.wikidata.org/wiki/Q2095630. But that limited what we could do.

So, we discovered that we could create a new object which was an instance of commemorative plaque. Our first attempt was https://www.wikidata.org/wiki/Q78438703 and we evolved what we captured there – adding statement, and Steve discovered the ‘openPlaques plaque ID'(P1893). Incidentally we also tried ‘openplaques Subject ID’ (P1430) but adding that to the plaque object throws an error. The latter should be added to the person record not the plaque.

We ended the day with

This was a great leap forward in one day and would pave the way for future work.

Since CTC18 ended, I’ve got firmly stuck into this project over the xmas break. Over the last three weeks I have now photographed over a hundred plaques (plenty of walking) and have created wikidata entries for most plaques and also their subjects in wikidata.

I’ll cover all of that, and how we can now use the data in part two, coming soon.

Tourism is vital to the local economy. While loads of tourists pass through Aberdeen we could do so much more to make it a destination of choice.

The featured image above is how we used to attract tourists to Aberdeen. How should we do it now? What role does design, marketing, technology or data play in new interactions with tourists?

Anyone – despite our name, coding is a small bit of what we do.

Of course, coders, data wranglers, designers and other techies are important to a hack weekend.

We’d be delighted to see you if:

So it’s a Toursim hack?

Yes – we’ll be identifying opportunities and barriers to making Aberdeen City and Shire a destination of choice for tourists, creating projects, teams and prototypes to address those. Some of those will turn into coding projects – and some will all be about research, service design and paper prototyping.

What happens over the weekend?

* identification of opportunities and barriers

* ideation to address those

* creation of project teams to work on those

* agile prototyping of solutions, so that by close of play Sunday we will have demonstrable solutions which could be developed into real worls products or services.

What do you mean, it’s not free? CTC is usually free!

At CTC 11 in December we broke with a tradition established over the previous 10 events and charged a small amount to attend. The reasone was that in a couple of recent CTC events we had higher than normal numbers of people booking free tickets and not showing up. That meant we over-catered, and despite our best efforts we had left-over food, which is a bad thing and wastes money too.

So, we attached a monetary value to the ticket (* backed up by our promise that those attending would get their  money back when they showed up). And it worked. The bookings didn’t go down. Fewer people dropped out. We didn’t waste food and we banked the money that went unclaimed. A few generous individuals recognising our new charity status even refused their money back, which was nice.

You can get tickets here (on Eventbrite).

If you must drive, then parking is free and open at weekends on campus.

Robert Gordon University will be sponsoring this event. We could do with another sponosor or two to make sure we cover all costs. If you would like to sponsor it, get in touch with @codethecity on Twitter.

We look forward to seeing you in February!

“We should build one for here!”

The tool allows you to redesign transit provision in the city by building new subway routes. By adding new stations. By removing or moving existing lines.

As is so often the case, we then start riffing on what it could also do. It could time travel using that tram data we have from the early 1900s. It could give alternate route options if we hook up to that academic project we spoke with earlier in the year. It could carbon count. It could give safety information for cyclists. We could data collect with a new app to feed it improved validation data…

Before we have the cake we’re discuss how pretty the icing will look.

In reality what we should be looking at is the bottom layer. The underpinnings.  The data.

We’re going to start with the commute. Where do people start, spend, and end their day? How do they move around? And when? No agenda. No grand insights planned. Just a good solid data gathering and modelling project.

If you have any data, or methodologies for gathering and storing such data we’d love to speak to you.

You can find out more about the New York Subway project here, and you can play with it here.