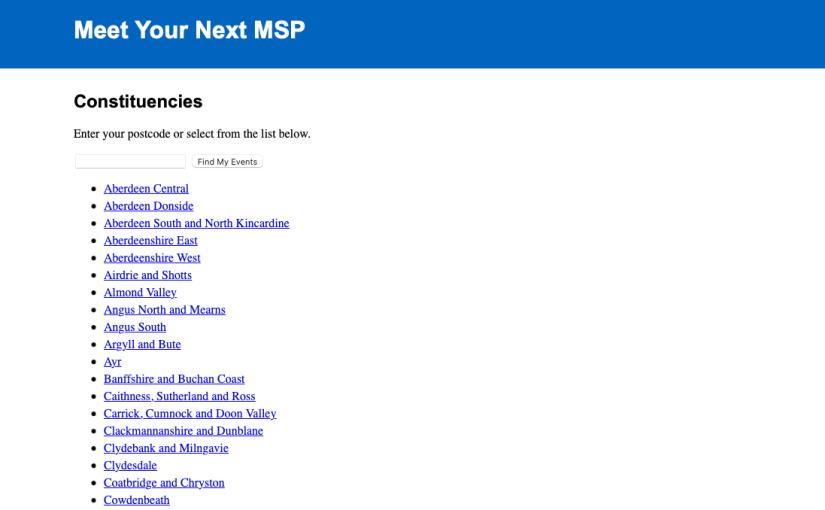 At Code The City 22 we started Meet Your Next MSP, a project to list hustings for the Scottish Parliamentary election. The team comprised of James Baster and Johnny Mckenzie.

James Baster had prior experience working on a similar project for the UK general election in 2015, where they listed over 1000 events in a project that was cited by many charities and campaigns. This showed him that there was interest in such a project. It also showed that many people don’t even know what a hustings areis, so the project deliberately tries to be accessible in order to introduce others to these type of events.

At Code The City 22 we built a basic working prototype; a git repository to hold the data; a Python tool to parse the files in the git repository to a SQLite database, and a Python Flask web app to serve that SQlite database as a friendly website to the public. This website invites submissions to the crowd-sourced data set by means of a Google form.

Thanks to Johnny who wrangled data from National Records of Scotland to make a dataset that mapped postcodes to areas; vital for powering the postcode lookup box on the home page of the site.

Storing data in a git repository is an interesting approach; it has some drawbacks but some advantages (moderation by pull requests and a full history for free). Crucially, it’s not a new idea and is something many people already do so it will be interesting to learn more about this approach.

Since the hackathon, the website has been tweaked, the Google form replaced with a better custom form and the website is now live!

We will run this over the next month and see how this goes.

And after the general election, the lessons won’t be lost. What we are essentially building are tools that let a community of people list events of interest together, with the data stored in a git repository. We think this tool could be applicable to many different situations.

A write-up of progress at the March 2021 Environment-themed hack weekend.

What problem we were addressing?

The public have access to two free, easy accessible waste recycling and disposal methods. The first is “kerbside collection” where a bin lorry will drive close to almost every abode in the UK and crews will (in a variety of different ways) empty the various bins, receptacles, boxes and bags. The second is access to recycling centres, officially named Household Waste Recycling Centres (HWRCs) but more commonly known as the tip or the dump. These HWRCs are owned by councils or local authorities and the information about these is available on local government websites.

However, knowledge about this second option: the tips, the dumps, the HWRCs, is limited. One of the reasons for that is poor standardisation. Council A will label, map, or describe a centre one way; Council B will do it in a different way. There is a lot of perceived knowledge – “well everybody just looks at their council’s website, and everybody knows you can only use your council’s centres”. This is why at CTC22 we wanted to get all the data about HWRCs into a standard set format, and release it into the open for communities to keep it present and up to date. Then we’d use that data to produce a modern UI so that residents can actually get the information they require:

There were six main tasks to complete:

What we built / did

All HWRCs are regulated by a nation’s environmental regulator:

A list of over 1,000 centres was collated from these four agencies. The data was of variable quality and inconsistent.

This information was added to a wiki page on Open Street Map – Household waste in the United Kingdom, along with some definitions to help the community navigate the overly complex nature of the waste industry.

From that the lists for Scotland, Wales and England were bulk uploaded to WikiData. The was achieved by processing the data in Jupiter Notebooks, from which formatted data was exported to be bulk uploaded via the Quick Statements tool. The NIEA dataset did not include geolocation information so future investigation will need to be done to add these before these too can be uploaded. A Wikidata query has been created to show progress on a map. At the time of writing 922 HWRCs are now in Wikidata.

Then the never-ending task of locating, updating, and committing the changes of each of the OSM locations was started.

To represent this data the team built a front-end UI with .NET Core and Leaflet.js that used Overpass Turbo to query OSM. Local Authority geolocation polygons were added to highlight the sites that a member of the public could access. By further querying the accepted waste streams the website is able to indicate which of those centres they can visit can accept the items they are wanting to recycle.

However, the tool is only as good as the data so to close the loop we added a “suggest a change” button that allowed users to post a note on that location on OpenStreetMap so the wider community can update that data.

We named the website OpenWasteMap and released it into the wild.

The github repo from CTC22 is open and available to access.

Pull requests are also welcome on the repo for OpenWasteMap.

The next task is to get all the data up-to-date and to keep it up to date; we are confident that we can do this because of the wonderful open data community. It would also be great if we could improve the current interface on the frontend for users to edit existing waste sites. Adding a single note to a map when suggesting a change could be replaced with an edit form with a list of fields we would like to see populated for HWRCs. Existing examples of excellent editing interfaces in the wild include healthsites.io which provides an element of gamification and completionism with a progress bar with how much data is populated for a particular location.

While working through the council websites it has become an issue that there is no standard set of terms for household items, and the list is not machine friendly. For example, a household fridge can be called:

A “fun” next task would be to come up with a taxonomy of terms that allows easier classification and understanding for both the user and the machine. Part of this would include matching “human readable” names to relevant OpenStreetMap tags. For example “glass” as an OSM tag would be “recycling:glass”

There are other waste sites that the public can used called Bring Banks / Recycling Points that are not run by Local Authorities that are more informal locations for recycling – these too should be added but there needs to be some consideration on how this information is maintained as their number could be tenfold that of HWRCs.

As we look into the future we must also anticipate the volume of data we may be able to get out of sources like OpenStreetMap and WikiData once well populated by the community. Starting out with a response time of mere milliseconds when querying a dozen points you created in a hackathon is a great start; but as a project grows the data size can spiral into megabytes and response times into seconds. With around 1,000 recycling centres in the UK and thousands more of the aforementioned Bring Banks this could be a lot of data to handle and serve up to the public in a presentable manner.

Saturday 6th March, 2021 was World Open Data Day. To mark this international event CTC ran a Wikidata Taster session. The objectives were to introduce attendees to Wikidata and how it works, and give them a few hours to familiarise themselves with how to add items, link items, and add images.

The theme of the session (to give it some structure and focus) was the Industrial Heritage of Aberdeen. More specifically the bygone industries of Aberdeen and, more specific still, the many Iron Foundries that once existed. I chose the specific topic as it is still relatively easy to spot the products of the industry on streets and pavements as we walk around the city, photograph those and add them to Wiki Commons, as I have been doing.

We had thirteen people book and eight turn up. After I gave a short presentation on how Wikidata operates we divided ourselves into three groups in breakout rooms. This was all on Zoom, of course, while we were still under lockdown.

The teams of attendees chose a foundry each: Barry, Henry & Cook Limited; Blaikie Brothers, and William McKinnon & Company Ltd. I’d already created an entry for John Duffus and Company in preparation for the event and to use as a model.

I’d also created a Google Sheet with a tab for each of the other thirteen foundries I’d identified (including those selected by the groups). I’d also spent quite a while trying to figure out how to access and search the old business and Post Office Directories for the city which had been digitised for 1824 to 1941. I eventually I built myself a tool, which I shared with the teams, which generated an URL for a specific search term for a certain directory. They used this, as well as other sources, to identify key dates, addresses and name changes of businesses.

They had also created items for foundry buildings – linked to Canmore etc, as well as founders. We enhanced these with places of their burial, portraits and images of gravestones. I took further photos which I uploaded to Commons and linked the following Monday. I created two Wikidata queries to show the businesses added, and the founders who created the businesses.

The statistics for the 3 hour session (although some worked into the afternoon and even the next day) are impressive. You can see more detail on the event dashboard.

We received positive feedback from the attendees who have been able to take their first steps towards using Wikidata as a public linked open data for heritage items.

I hope that the attendees will keep working on the iron founders until we have all of these represented on Wikidata. Next we can tackle shipbuilders and the granite industry!