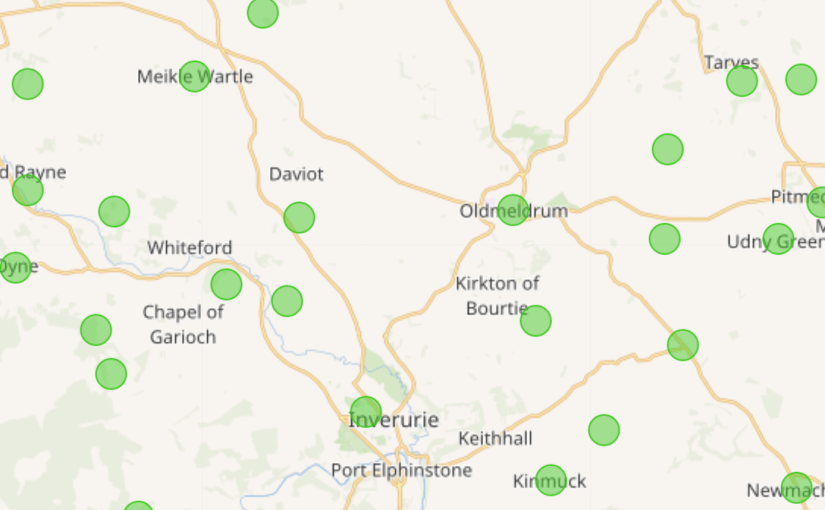 This project was part of Code The City’s #CTC20 History and Culture hack weekend.

To identify (all of) the settlements – towns, hamlets, villages – in Aberdeenshire and ensure that these are well represented with high quality items on Wikidata and Wikipedia.

This gave a list of 183 settlements – with five having missing Wikipedia articles.

To compare, we then wrote an initial Wikidata query  which only returned 10 results. It turned out that there are two (or more) Aberdeenshires in Wikidata (each representing something subtly different) and we used the wrong one.

Amending our query and running the new one   gave us 283 settlements. On checking we saw that  they included the 10 above too. It also included whether the item had a Wikipedia article associated with it. We used this Wikidata list (with a quick python script) to update the original Wikipedia list page above.

We further updated the query adding whether there was a photo associated with the item giving firstly these results and, by changing the default view to map, we could see where the coordinates were placing each point. The vast majority (est. 90% ) of items had no photograph.

By following this tutorial that Ian had created recently,  we were able to create a custom clickable map in the WikiShootMe tool. This means that anyone can click on a red dot, and choose to take or upload a photo of the settlement and have that added to Wiki Commons, and associated automatically with the Wikidata item.

We published that on Twitter and asked for contributions. Not only could someone take and upload a photo, but it also meant that one could search Wiki Commons for a matching image (which hadn’t yet been associated with the Wikidata item) and tell it to use that. Where none existed it was possible to search on Geograph for a locality. The licensing on Geograph is compatible with Wiki Commons’s terms, so if a suitable image was available, we could use the Geograph2Commons tool and import it.

Over the next few days (i.e. beyond the weekend itself), we went from a starting point of about 10% of settlements in Wikidata having photos to about 90%. You can see this on an image grid, or table.

Looking closer at the mapped Wikidata, a number of the items’ coordinates were well out (e.g. Rosehearty, Sandhaven New Aberdour etc). We started to fix these. We did this by finding the settlements in our WikiShootme map, right clicking on the correct position and selecting show coordinates, and pasting those back into the Wikidata item.

Where the original coordinates were imported from Wikipedia it raised a warning. We fixed each one in Wikipedia too, as we went. This needs much more error checking and fixing.

Our list of places started at 183 links on wikipedia, it grew to 283 with wikidata but still it was clear that many of the populous settlements are missing from Wikidata such as Fintry.

These can be added manually but we figured there must be a larger list available from another source like OpenStreetMap (OSM). Not knowing how to get this list we put out a tweet for help.

@MaxErickson was one those that came to our aid with a query search for overpass turbo (a web-based data filtering tool for OpenStreetMap) which listed all its identified places in Aberdeenshire with coordinates and place types (town, village, hamlet). This gave us over 780 results but many of these were farm steadings or small islands (islets) in the Ythan, with a bit of filter we got it down to 629 places. We plan to add these to Wikidata, but first it’s worth gathering more data on them.

We wanted to add more information to these place such as which constituency each was in for Scottish and UK elections. The Boundary Commission for Scotland website has a tool which lets you enter a postcode and returns this information:

After digging around their website we found that they use mapit.mysociety api to do this. Mapit is open-source software but there is a charge for using their api, luckily CodeTheCity is a charity and eligible for free usage so Ian signed us up!  The API accepts a variety of inputs including lat/lon which we got from the turbo query of OSM.

We are going to get the csv uploaded to Wikidata via Quick Statements, to add the missing places, update existing places with Mysociety data and correct any wandering coordinates in wikidata/wikipedia.

One thought on “Aberdeenshire Settlements on Wikidata and Wikipedia”